This project, funded by the Research Council of Norway, involves basic research on triangulated categories in algebra, and partly algebraic topology. The project period is 2013-2016, and the main part of the funding is for hiring three postdoctoral fellows and one PhD student.

What is a triangulated category?

The notion of a triangulated category was introduced independently in algebraic geometry by Jean-Louis Verdier, based on ideas of Alexander Grothendieck, and in algebraic topology by Dieter Puppe. These constructions have since played a crucial role in representation theory (derived and stable module categories), algebraic geometry (derived categories of coherent sheaves, theory of motives), commutative algebra, algebraic topology (stable homotopy theory) and other areas of mathematics (and even theoretical physics).

of objects and composable morphisms in T is called a triangle. Let Δ be a collection of such triangles. The triple (T,Σ,Δ) is a triangulated category if the four triangle axioms (TR1), (TR2), (TR3), (TR4) are satisfied. The last axiom, (TR4), is called the octahedral axiom: it can be illustrated using an octahedron in which the vertices are objects and the edges are morphisms. 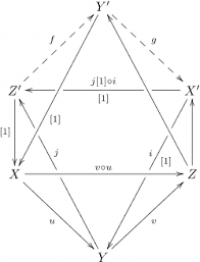 People involved in the project