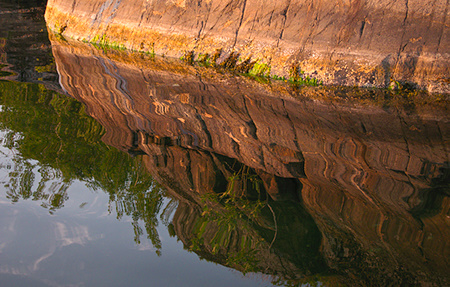 Unless otherwise noted, the notes listed here are not part of the curriculum. Their main purpose is to provide a different perspective than the book, especially where I depart from the book.

A quick note on the formats: The “screen” version is optimized for screen reading. It has pages of variable length, with a page break between subtopics. The A5 version is more conventionally formatted, and the “print” version is just the A5 version with two pages per A4 sheet, for easy printing.

I intended to cover chapter 1 this week, but did not have time for section 1.4.

Regarding Zorn's lemma: If you are interested in a proof of Zorn's lemma from the Axiom of choice, have a look at the beginning of my notes on functional analysis (but this is not part of the curriculum for this course).

Section 1.4 on algebras, σ-algebras, and monotone classes will be new to most of you. It will seem quite abstract and strange; but later on, this will turn out to be central to almost everything in the course.

Then we move on to chapter 2.

Continue in chapter 2. (A better update hopefully later on Monday …)

Brief update: On Monday, I used a different approach than the textbook to show that any open set of real numbers is a pairwise disjoint union of open intervals. I have written up a tiny note on this: See «intervals» in the notes section.

Before I got going on the Riemann integral we need the Heine–Borel theorem, however. I just had to write it up in my own way: See «Compactness» in the notes section.

First, finished off the Riemann integral. There was not much left. But since my approach differs too much from that of the book for comfort, I have written up a little note: See «Riemann integral» in the notes section.

Like previously, I was unable to restrain myself and departed sufficiently from the book that I felt some notes were necessary. See under “Lebesgue measurability” in the notes section.

On Wednesday, Eugenia Malinnikova will cover the basics of the Lebesgue integral. (It is possible that I have time for some of it on Monday already.)

I seem to have fallen behind with updating this page. Will correct that soon. For now, just note that we have finished Chapter 4.

We will start on Chapter 5. (More later.)

Finished Chapter 5 on Monday. A little more on the general abstract Lebesgue integral, including the Dominated Convergence Theorem (DCT) and its friends.

Covered convergence in measure next, but did not quite finish it until Wednesday.

Then I went back to the start of §6.1 with the definition of semialgebras, and how one can make an outer measure from a function on a semialgebra satisfying certain criteria.

As an example, I started building towards the coin tossing probability space, which models an infinite sequence of coin tosses. [There were details here that I have now moved into a new note on coin tossing – see the Notes section.]

I ended at Proposition 6.3, and gave a very brief – and very fast – proof of it. It all fit on 2/3 of the blackboard, but of course some explanation is missing. See the picture below. I might revisit this proof on Monday.

Moving further into Chapter 6. First finishing 6.1, with the uniqueness of the extension to a measure. I will present a proof based on the monotone class theorem (p. 25 in the book) instead of the one in the book. I plan to skip 6.2 for now, hoping to catch it later. So we move on to 6.3 on product measures, continuing to 6.4 with the (very important) Tonelli and Fubini theorems on interchanging the order of integration in double integrals.

I will collect some loose threads surrounding multiple integration, particularly Lebesgue measure and integration in higher dimensions. Then I will move on to Chapter 8. Instead of the example given in the book of a continuous function which is nowhere differentiable, I am looking into using the Weierstrass function instead, from Jon Johnson's 2010 paper (available here if you are within the NTNU network – otherwise, you might have to pay to get it) … upon closer examination, I think not. It seems to depend on too much Fourier theory.

Anyhow, on Monday I went through the Vitali covering lemma and its proof. On Wednesday, we got to use it to show that monotone functions are differentiable almost everywhere. As is so often the case, I wrote a note on this, trying to explain carefully what is going on. The proof is the same as in the book really, but broken into smaller pieces and organized in a different sequence that I hope makes it more understandable.

Before we continue with functions on bounded variation (BV), I will do some work on the theorems of Egorov and Lusin. These are important theorems that the book has shuffled off to exercises, somewhat undeservedly I think. I cannot, and will not, resist the temptation to push Lusin a bit farther than the book. After the BV functions, attention turns to the fundamental theorems of calculus, Lebesgue style.

On Monday, I introduced some results related to the fundamental theorem of calculus for increasing functions. I have added these to the end of the “differentiability” note. Also, I covered Egorov and Lusin to somewhat greater depth than the book; see a special note on this.

On Wednesday, we really start on BV functions, then move on to the fundamental theorem of calculus.

We basically finished Chapter 8 on Monday. Note that I use the standard definition of absolute continuity, not the non-standard one in the book. See the Notation page for details. As an application of the Fundamental theorem of calculus, I showed that almost every point of a Lebesgue measurable subset of \(\mathbb{R}\) is a point of density of the set, meaning points \(x\) for which \[ \lim_{h\searrow0}\frac{\lambda(E\cap[x-h,x+h])}{2h}=1. \] The proof is basically looking at \(F(x)=\int_{-\infty}^x\chi_E(t)\,dt\) and noting the consequences of the statement that \(F'=\chi_E\) a.e. I also started on section 6.2, the Lebesgue–Stieltjes integral and measure.

On Wednesday, we finish section 6.2, and close with a quick application to probability theory – and with that I think we shall say we are through the curriculum.

That's it, folks. The lectures are done, for better or worse. Keep an eye on the front page for any messages regarding office hours before the exam date.