How to install and use Anaconda

We recommend using the Anaconda distribution to install Python, Spyder as your programming environment, and Jupyter Notebook for creating interactive documents.

Make sure to click Install for me only if the installer says: You cannot install Anaconda3 in this location. The Anaconda3 installer does not allow its software to be installed here.

Refer to the detailed step-by-step instructions for Mac if needed.

Refer to the detailed step-by-step instructions for Windows if needed.

Refer to the detailed step-by-step instructions for Linux if needed.

Anaconda may also be run from the calcfarm.ntnu.no server, but it is highly recommended to install it on your own computer. Learn how to connect to Calcfarm if you are unable to install Anaconda.

Then, click the Launch button below the Spyder icon on the Navigator Home tab: 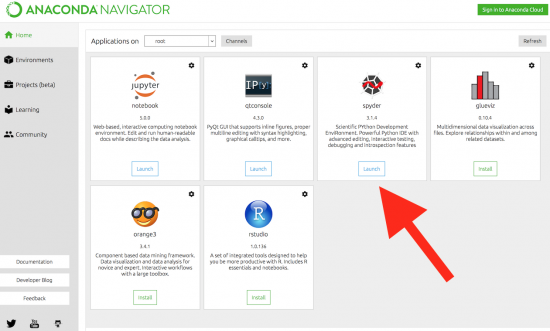 Notebook documents contain the inputs and outputs of your computation, and can serve as a complete computational record of a session, making it easy to share reproducible work.

If your course needs other packages than those installed by default, these will be installed in a separate environment, and you'll need to use that environment for course work. The steps involved are:

Step 1 of 3: Update your Anaconda installation

Then, run the following two commands:

Download the .yaml file from the course home page and save it to your computer.

Open Anaconda Navigator and click the Environments tab in the left menu. Then click Import and select the .yaml file you downloaded. 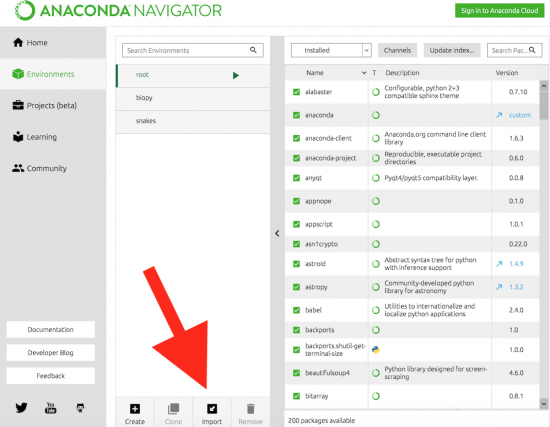 For more information, refer to Managing environments in the Anaconda documentation.

Step 3 of 3: Starting Spyder from the correct environment

To use this environment, you must select it from the drop-down menu in the Home tab before starting Spyder: 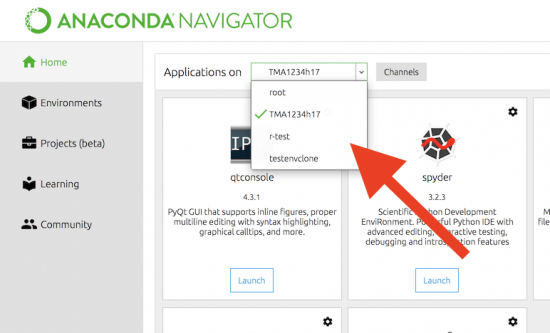 If you are using Python in your course, we recommend that you:

Install Anaconda exactly as described above, and use this version to create exercises. There may be differences between the packages in your "normal" Python installation and those that Anaconda comes with, and you should run exactly the same environment as your students will.

If you need extra packages, do not ask your students to install them using conda or pip commands. Instead,

A short introduction to debugging Python programs in Spyder are available in English and Norwegian: